Q and A with the Imagination Movers


Music makes our house go 'round most days. Whether we are baking, playing games, riding in the car, or playing tag, there is music playing in the background.   We often find ourselves stopping whatever toys we are transforming, Barbies we are dressing, tweets we are tweeting, or laundry we are folding to come together in our kitchen and have a spontaneous dance party. We have watched the kids' tastes grow, but some music is a staple. One of our long lasting favorites is the Imagination Movers. Have you heard of them? They are four family guys, dressed in blue suits, solving problems with some rock and roll.

Photo Credit: Adams Photography
We've been fortunate to see the Imagination Movers live in concert twice. They are interactive, goofy, engaging, and FUN! My husband and I have a blast watching the smiles on our kids' faces the entire show while they dance along with Rich, Scott, Dave, and Smitty. Yes, we sing along, too. You can't help it. The energy is infectious. This year's tour, titled Rock-O-Matic (which matches the title of their latest album), is kicking off on April 10th in Buffalo, NY. You can find a complete list of their tour stops online on the website.

Before leaving on their tour, the Movers sat down to answer some interview question for their fans. Please enjoy the responses below: 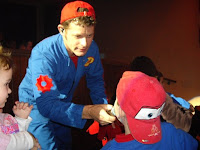 The Night Light Stories household is looking forward to our third concert to jump up, get down, stand up, and turn around with the Movers in May. If you haven't seen or heard in the past, the Movers have recorded bumpers for three of our stories and been part of our Lighting the Way With Words. You can listen to their audio clips from last tour and see which words they were a part of by clicking the links below: