Click here to listen to: Inky's Christmas (our second holiday story)View the blog post with activities for the story: All Things Inky 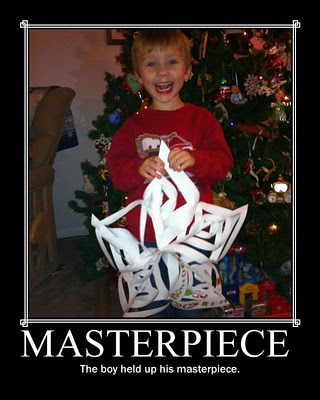 Snowflakes falling from the sky. Each one is unique just like every child and every masterpiece they make.  We encourage you to share their unique masterpieces with us by sending us photos to nightlightstories@gmail.com.
Happy Holidays to one and all!
Posted by Miss Mel at 8:30 PM No comments:

Click here to listen to: Red vs. Green
Hi All,

Happy Holidays from the Night Light Stories household! We have been busy decorating the house, visiting with our family, making cookies and gingerbread houses, and trying to soak in all the sights, sounds, and smells around us!  Our son has been checking each morning for snow out the window. It hasn't happened yet, to his disappointment, but with all this cold weather, we don't think he'll have to wait long!

VORACIOUS VOCABULARY
What did you say? A word of the day! In our story there are many
juicy words that are fun to use and say.
competition: a contest for some prize, honor, or advantage.
deflect: turn from a true course or straight line.
frolic: playful behavior or action.
inspiration: something inspired, as an idea.
intercept: to take posession of (a ball or puck) during an attempted pass by an opposing team.

JUST ADD IMAGINATION!
Try these activities to keep your imagination glowing after hearing the story.
1. Jack Frost told the team that they “stink, stank stunk”. Since he is the coach, part of his job is to motivate his team. He should have said things that were “inspiring” to them. Make a list of things Jack Frost could have said to his team. For example, pointing out some positive things players were doing that could help them to improve.

For example, the Boston Bruins logo is:

7. Make a list of all the Christmas references you hear in the story.

8. The elves pull “lucky charms” off the tree. Create something that is your lucky charm?

9. Write lyrics and create a tune for a song from Bobby's favorite rockband, "Twisted Tinsel".

10. Visit the NHL for kids website and play an interactive hockey game!

11. Do you know the rules for hockey? Learn all about hockey at this website!

12. Believe in yourself! Make a list of all the things you believe in.

COMPREHENSION CHALLENGE
After listening to the story, can you recall the details to answer these questions?
1. Who is the main character in the story?
2. What were some problems the Mistletoes were having in the first and second quarter?
3. How did Bobby inspire the Mistletoes and himself to get back out there for the third period?
4. Where is the Winter Holiday Hockey Classic being played?
5. Why do the Misteltoes' think the Leprechauns have all the luck?


The Announcers Box
In our story, we have two announcers recapping the third period for you.  These announcers, "Rick Gingerbret" and "Don Cheery" are based on some famous hockey announcers that Mr. Chris grew up listening to in Buffalo.  The real announcer, Rick Jeanneret, is known for some great calls and some of them are used in the story as an homage.  Listen to Rick Jeanneret's Top 10 calls!


BRIGHT BIRTHDAY WISHES
We want to send out bright birthday wishes to:
Papa G of Massachusetts
Uncle Markie of Massachusetts
Nani B of New York
Cavin D of West Virginia
Shawn D of New Hampshire
We hope your day SPARKLED!
As always, we look forward to the many stories we can share together!
Happy Holidays! 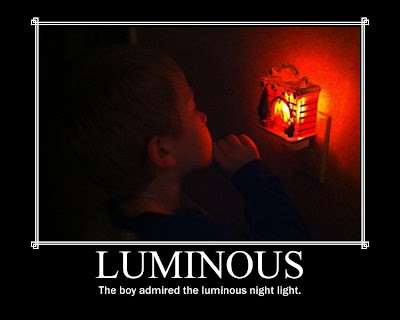 This time of year, there are many  luminous houses, trees, and decorations to be seen all around.  Driving to the store or home from an activity when it is starting to get dark out is always so much fun this time of year! We love to search for the brightest houses and the most creative decorations.  Please feel free to share your luminous decorations with us at nightlightstories@gmail.com or on the Facebook Fan Page!
As always, we look forward to the many words we can share together!
Posted by Miss Mel at 12:20 PM No comments:

"We need to make a Christmas scene for our wall." This quote from our son prompted the project we did today! It was a lot of fun, a little bit educational, and used some of our million craft materials that we have in our box!  So, what did we do?  We decorated the wall, of course!

First, we measured the wall to find out how much paper we needed. We decided to use pillows to measure rather than a ruler.  It was good practice using non-standard forms of measurement. 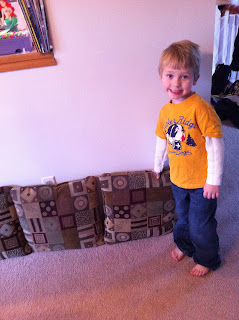 We found the wall was four pillows long. We laid the pillows out on the butcher paper so we could cut the right amount to fit on the wall. 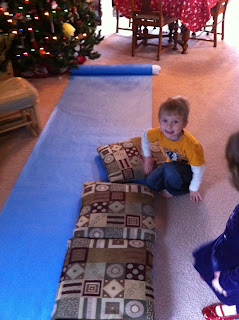 Of course, then he had to see how many pillows he was. He was two and three quarter pillows long! 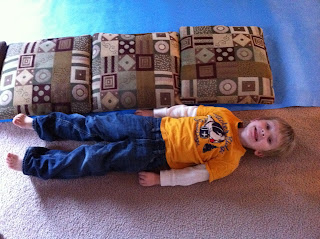 We cut the butcher paper together to practice scissor skills and then we hung it up on the wall. 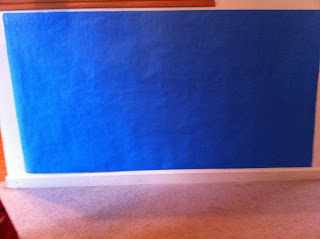 We decided to add a white hillside. 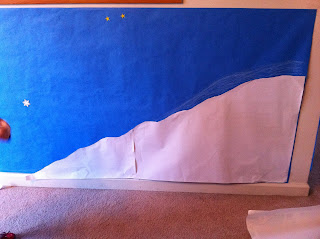 Then we decorated the mural with pictures we cut out from old Christmas cards we had saved, Styrofoam stickers, paper snowmen, google eyes, and any other treasures we could find in our craft box! 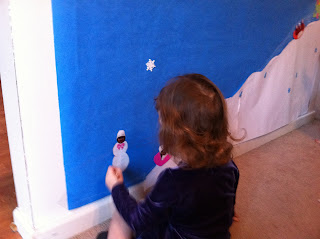 We colored, glued, and decorated! 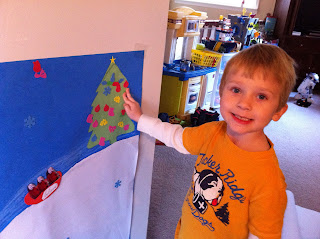 My favorite thing that our five year old created on the mural was a reindeer pulling Santa's sleigh. Notice Santa riding in the pink sleigh! 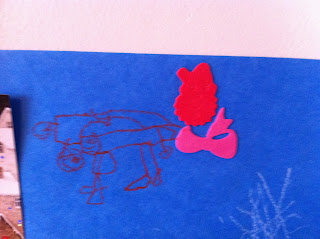 Our finished product was colorful
and had a touch of all of us on it.
Most of all, it was great teamwork! 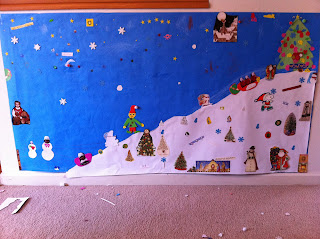 We would love to see your holiday creations that you make as a family!  Send them to nightlightstories@gmail.com or post them on our Facebook Fan Page!
As always, we look forward to the many family projects we can share together!
Posted by Miss Mel at 5:54 PM 2 comments: 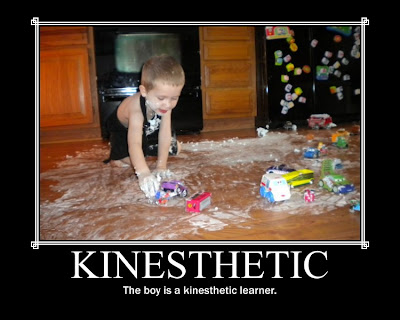 Did you know there are different types of learning?  Our own children  definitely learn best when they play games and work with their hands.  What type of learner is your child?  You can find out by taking a 10 question quiz at the Family Education website.  Mr. Chris and I found a more detailed quiz for adults if you would like to find out your own personal learning style.   We would love to hear what you come up with.  You can send your learning style to nightlightstories@gmail.com!
Posted by Miss Mel at 8:35 PM No comments: